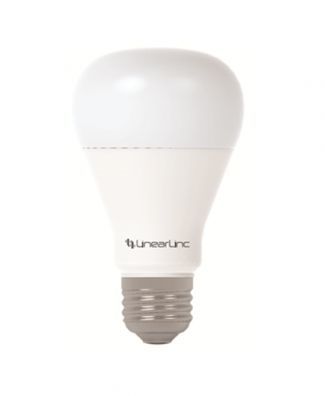 The LinearLinc™ BulbZ is a Z-Wave controllable and fully-dimmable, instant-on LED screw-in light bulb that provides pleasant soft-white illumination. Equivalent to a 60-watt incandescent bulb and usin g only nine (9) watts of energy, BulbZ is estimated to save approximately $140 (USD) throughout its average lifespan*.

As with all Linear Z-Wave products, BulbZ operates at the standard 908.42 MHz freque ncy, gives users the convenience of wirelessly controlling lighting from a Z-Wave hub or controller, and lets users program scenes to create comfortable, inviting lighting settings to suit a varie ty of occassions and moods.

FEATURES
• Wirelessly control the bulb from anywhere (requires Z-Wave Apps for iOS or Android)
• Turn the bulb ON, OFF, or use its dimming features to adjust to 100 levels of brightness
• Acts as a wireless repeater to extend the Z-Wave mesh network to cover longer distances
• Integrates with other Z-Wave certifed products from Linear and 2GIG by Linear

Save this product for later